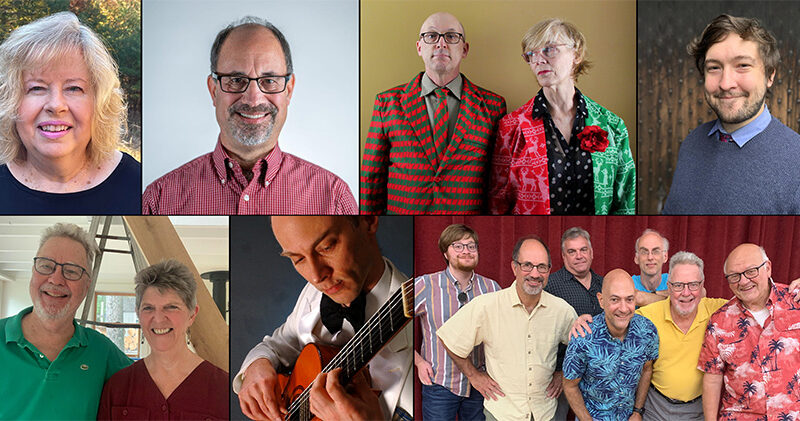 Ars Choralis returns to its occasional in-home fundraiser Artists Within featuring members of the chorus showcasing their talents beyond their choir voices, after a two-year gap in programs due to the Covid pandemic.

Artists Within features members of Ars Choralis as well as guest musicians & singers, performing a variety of styles of music. Presented in the intimate setting of The Sheeley House Bed & Breakfast (a restored 18th c. home), located at 6 Fairview Ave., off Lucas Ave., in High Falls, admission is by donation for the benefit of Ars Choralis.

Admission is by donation, and seating is limited so reservations are strongly recommended:  call the Sheeley House at 845-687-4360.

This program showcased singers Harvey Boyer and Greg Dinger, who also play keyboards & guitars respectively. Boyer has been singing with Ars Choralis for about 10 years and Dinger has been with the chorus since the 1990s (and was then the president of the AC board). They’ll be joined on several numbers by guest artist, singer Nicole Ryan (who happens to be a bandmember of “Fishbowl,” of which Boyer & Dinger are also members).

Dinger and Boyer are seasoned performers and music educators in the Hudson Valley area, and have each performed in a variety of classical, musical theater and rock & jazz situations for many years.

The “Artists Within” series continued with a voice & guitar recital by Anita Shamansky and Greg Dinger. The first half of the program featured art songs from Elizabethan England through the 19th century by Dowland, Purcell, Handel, J. S. Bach, Mozart, Bellini, Schubert and Liszt; the second half offered folk-derived songs (arranged by Manuel DeFalla and others) from Spain, France, the British Isles and America, and a show tune & opera song by George Gershwin.

As part of the Artists Within programs, works of Ars Choralis members including painter Barbara Berlind, painter/photographers Renee Samuels and Christina Gardner, potter Sue Ulrich, quilters Sarah Kessenich and Bernice Leonard, and jeweler Leëta Damon have been on display at these performances.