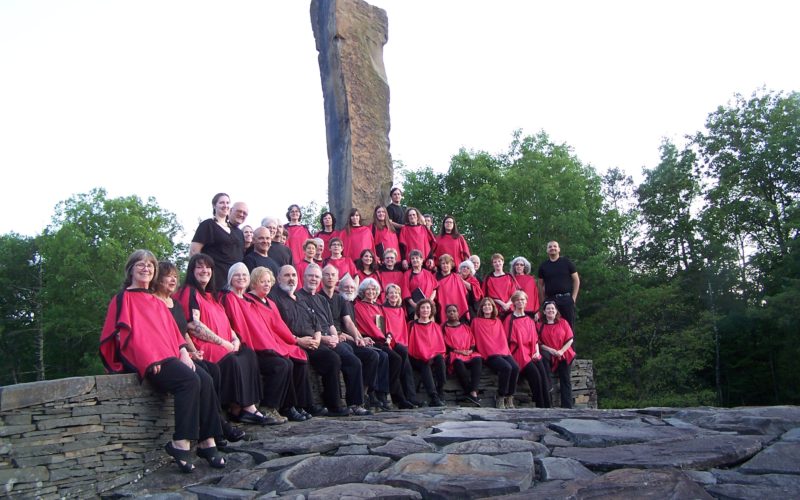 Mozart in the Spring

After two years of shut-down due to the Covid-19 pandemic, we return to presenting live choral music in a triumphant performance of Mozart’s Vespera solennes de confessore with soloist and orchestra.

Hold On: A Concert of Hope and Resilience

A New Year’s Eve virtual concert featuring best-selling author Elizabeth Lesser sharing a message of hope and resilience along with newly-recorded songs and readings to usher in the new year. Watch and listen here.

Welcome Yule: The Ballad of the Brown King

A recorded performance on November 20th, 2021 of Margaret Bonds’s Cantata, The Ballad of the Brown King with soloists, piano and chorus and featuring the pastor of Riverview Baptist Church in Kingston, NY reading from Langston Hughes, “Black Nativity.” Watch and listen here.

Four choruses, from Belgium, Italy, NY City and Woodstock, join together in this virtual presentation to perform the Fauré Requiem to remember, with gratitude, the front-line workers who have risked their lives during the Covid-19 pandemic and to honor the millions of people throughout the world who have lost their lives to the virus. Watch and listen here.

Continuing the tradition of offering concerts of hope and unity on New Year’s Eve, this virtual concert based on Langston Hughes’s “Let America Be America Again” showcases readings from prominent, multi-cultural civil rights leaders and exposes racism in America with hope and encouragement for equality and common respect for one another. Watch and listen here.

A virtual performance based on Maya Angelou’s “Amazing Peace”, read by Gilles Malkine, interspersed with songs that express our yearning for peace and goodwill through songs such as “Quiet Place” and “It’s Time to Remember the Poor” and with visuals to enhance the message of the words and music.  Watch and listen here.

A Virtual Concert of Hope, Love and Courage

In response to the onset of the Covid Pandemic crisis around the world, and the shutdown of “normal” life – concerts, live music, restaurants, etc., –  we present our first online concert. We hope the beauty of the music and images, melded with words of love and encouragement, will fill your heart with renewed confidence in the promise of tomorrow. Watch and listen here.

We All Come From Somewhere

A benefit for the Ulster Immigrant Defense Network highlighting that most Americans came from somewhere else once upon a time, and that all have contributed to the great tapestry that is American culture.

A choral adaptation of the familiar Jimmy Stewart film which includes the cultural and religious diversity of the 40s in the dialogue, music and visuals.

Ars Choralis sings of resilience and hope in response to pain and suffering in a concert inspired by the South African word “ubuntu” (the concept of common humanity, oneness) and the Somalian proverb “If we come together, we can mend a crack in the sky.”

Bach and His World

The contrasting styles and moods of Bach’s world, all in one concert.

The Road to Bethlehem

Singing the Spirit of the Season

A holiday celebration of words and music inspired by Native American values of honesty, integrity, gratitude and respect for the sacredness of all life.

A concert upholding the legacy of the venerated sixteenth president of the United State through poetry and tAmerica music spanning two centuries.

Bernstein’s music, imbued with his love of music and people, expressed in a concert dedicated to his brilliance and enduring legacy of love.

Music of Haydn and Copland

Featuring Haydn’s Mass for Troubled Times (Lord Nelson Mass), his Cello Concerto #1, and selections from Copland’s Old American Songs, including Simple Gifts, Long Time Ago, Ching-a-Ring-Chaw and At the River.

Performing works of women composers of the last millennium, many of whom have been neglected in performance for centuries. Composers included Princess Friederike Sophie Wilhelmine, Williametta Spencer, Fanny Mendelssohn Hensel, Lili Boulanger and Pauline Oliveros, among many others. Three movements from “The World Beloved:A Bluegrass Mass” by Carol Barnett were performed with  bluegrass accompaniment.

Welcome Yule: Peace in the Midst of War
We commemorated the remarkable story of the World War I Christmas truce, interspersing carols sung by the soldiers and music by German and British composers with descriptions drawn from soldiers’ letters home.

Música Hispánica: Then and Now
Featuring Ariel Ramírez’s Misa Criolla and a wide variety of Spanish- and Portuguese-language music throughout the ages.

Mozart Requiem
We celebrated the peak of our 50th season, and the beginning of the Maverick Concert Hall’s 100th season, by performing Mozart’s hauntingly brilliant Requiem with chamber orchestra and vocal solists at the Maverick.

Music in Desperate Times: Remembering the Women’s Orchestra of Birkenau
The first full performances of MDT since 2009 were presented at Christ Episcopal Church in Poughkeepsie and Woodstock Jewish Congregation.

Messengers of Peace
This special program of music and spoken word at Old Dutch Church, Kingston, was offered as a gift to the community. Our audience generously donated over $1300 to support Caring Hands Soup Kitchen in Kingston.

Welcome Winter, Welcome Yule
The 19th annual celebration of the season continued the tradition of combining diverse styles of music into a single musical fabric. The music ranged from Henry Purcell’s harrowing “The Cold Song,” through the warmth of hearth and friendship in “Winter’s Coming Home” by the monks of Weston Priory, to the whimsy of P. D. Q. Bach’s “O Little Town of Hackensack” and “Good King Kong Looked Out” — to name a few.

Catskill Echoes
A concert celebrating the Hudson Valley’s Musical Legacy, including 19th century shape note songs of Lewis Edson and Lewis Edson Jr. of Shady, Native American prayer and music, music inspired by historical events, folk music of Camp Woodland, music written by Ernest Williams of the Saugerties Band Camp, and compositions of celebrated musicians and performers who have made the Catskill Mountains their home.

Miracle in Bethlehem
World premiere of Barbara Pickhardt’s and Johanna Hall’s Miracle in Bethlehem. Performed for overflowing audiences at Overlook Methodist Church in Woodstock, NY, this musical telling of the Christmas story featured the 45-voice chorus, 14 soloists and a chamber ensemble of violin, cello, piano, percussion, flute and trumpet.

75th Anniversary of Kristallnacht Commemoration
As part of the Big Read program organized by the Poughkeepsie Public Library, Ars Choralis performed excerpts from the Music in Desperate Times program at the Bardavon Theatre in Poughkeepsie.

Carmina Burana
Carl Orff’s Carmina Burana was performed outdoors in the amphitheater of the Opus 40 Sculpture Park by a full complement of choristers, soloists, children’s choir, duo-pianists and percussionists. The extraordinary artistic and natural beauty of Opus 40 and the imaginative use of its many levels and unusual singing locations made for a uniquely dramatic performance of Orff’s celebrated masterpiece.

The Road to Freedom: A Tribute to Martin Luther King, Jr.
In celebration of the life of Dr. Martin Luther King, Jr., Ars Choralis performed “The Road to Freedom,” a concert of remembrance. The concert followed in the words and music tradition of earlier Ars Choralis concerts. Narrators read poetry of Paul Lawrence Dunbar and Langston Hughes and excerpts from Martin Luther King Jr.’s sermons, speeches, and “Letter from Birmingham Jail.” Songs, interspersed among the readings, were performed by Ars Choralis and guests, The Riverview Missionary Baptist Church Choir, Nashville soul singer Jonell Mosser, and 12-year-old Carmen Higuita. The concert also premiered three songs inspired by Norman Rockwell’s illustrations of events occurring during the Civil Rights written by Tony nominee Jim Wann. The concert attracted hundreds of people to Riverview Church in Kingston and The Woodstock Jewish Congregation in Woodstock to honor the life of Dr. Martin Luther King, Jr. and to help Riverview Missionary Baptist Church rebuild after a devastating flood from Hurricane Sandy. Read a review here.

Wings of Hope
Ars Choralis turned back the clock to the 1940s for Wings of Hope and combined music and words to tell the fascinating story of the historic Berlin Airlift, the first humanitarian mission carried out by air. The true-life accounts of the men who served in the effort, their wives back home and the people of Berlin were interspersed with music. In the musical spirit of the 1940s, Ars Choralis sang a hit parade of songs. Got-to-Lindy dancers were featured swinging to the tunes of the Big Blue Big Band.

Welcome Yule: A Tale of Two Christmases
Set in jolly old England, centuries apart, A Tale of Two Christmases visited the courts of two noted monarchs: Queen Elizabeth the First and Queen Victoria. Beginning with medieval chant, a mystery play and ancient carols from the time of Elizabeth the First, the performance fast-forwarded three centuries to a Victorian Musical with a cup-o-wassail, roving carolers, brass music, and Ars Choralis’ own version of Charles Dickens’ story of Gabriel Grub from The Pickwick Papers. From the mystical to merriment — all in one performance!

Welcome Yule: Go Tell it On the Mountain
A concert laced with the sparkling rhythms, wonderment and joy of Hispanic Appalachian and African American carols tied together by the remarkable saxophone styling of Robert Shaut and joyous voices of the Hudson Valley Youth Chorale, all summed up in a spirit of unity and goodwill expressed in the words of Maya Angelou’s poem Amazing Peace.

Spellbound on the Solstice
The monumental Opus 40, where melodies resonating from stone echo across the remarkable sculpture, was the perfect setting for a spellbinding solstice concert. The hundreds of people seated in the amphitheater, on the hillside and the plateau above were in unanimous agreement. The multi-faceted concert drew upon four centuries of music and myriad moods to close simply with Pete Seeger’s words, “Guard well our human chain. Watch well and keep it strong. . . .”

Welcome Yule from the Misty Isles
Benjamin Britten’s Ceremony of Carols opened the concert, perfectly blending the archaic Old English language with a contemporary musical setting. Through the magic of Dylan Thomas’s poetry, A Children’s Christmas in Wales, glimpses of holidays past were brought to life and illuminated by the songs of Ars Choralis and tunes of guest artists Celtic Crossing.

Music In Desperate Times: Remembering the Women’s Orchestra of Birkenau

Third series of performances at Cathedral Church of Saint John The Divine, Manhattan and in Berlin Germany.

A choral concert set in the Holocaust featuring a small reconstruction of the Women’s Orchestra that played in the Camp at Birkenau during WWII. Their story was told with readings from their memoirs and histories, along with representative orchestral selections and choral commentary.

Welcome Yule: Through a Stained Glass Window
Musical portraits of Christmas scenes through the ages. The concert featured ancient carols performed by The Catskill Mountain Renaissance Consort, the Medieval Liturgical Drama of The Three Kings, Early American shape note songs and music of Samuel Barber, Morton Lauridson, and others.